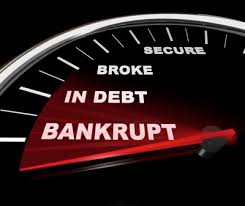 Bankruptcy and Insolvency are used in Legal theory to describe situations where an individual or corporate entity is unable to generate sufficient cash flows to satisfy its financial obligations as and when due.

Bankruptcy proceedings are, in essence, punitive in nature and are employed to ensure that persons who cannot meet their financial obligations are disqualified from holding public offices, occupying managerial positions and practicing regulated professions, except they are engaged as employers.
An act of bankruptcy raises an assumption of the insolvency of the debtor, and enables a creditor (or a debtor himself) to petition for the debtor’s bankruptcy. The procedures are as follows:
(a) An act of bankruptcy has been committed
(b) A petition based on an available act of bankruptcy may then be presented by a creditor or group of creditors (or the debtor may present a petition against himself to be declared bankrupt).
(c) A receiving order making the official receiver, the receiver of the debtor’s property will be made, if the petition is proved to the satisfaction of the court.
(d) A statement of affairs will be drawn up by the debtor.
(e) A meeting of creditors shall be held to discuss the statement and decide whether to proceed with the bankruptcy or accept any composition or scheme of arrangement which he may offer.
In such a situation, the court will appoint an official receiver who will gather in and dispose of the debtors assets and subsequently distribute the proceeds amongst the creditors.
With respect to companies, the process known as winding up provides the creditors with the opportunity to liquidating the assets pay outstanding debts, and distribute the remainder to the shareholders. In a situation where the company is unable to meet its liabilities up to N2,000. Winding up proceedings are special proceedings, the result of which terminates the life of a company and as such the provisions of the law set out in the Companies and Allied Matters Act, Laws of the Federation, 2004 on the winding up of companies must be strictly complied with in form and substance. Part XV of the Companies and Allied Matters Act, Cap. C20, Laws of the Federation of Nigeria, 2004 (“the Act”) makes provisions for winding up of companies in Nigeria.
A company may be wound up in the following circumstances.
(a) the company has by a special resolution resolved that the company be wound up by the court;
(b) default is made in delivering the statutory report to the Commission or in holding the statutory meeting;
(c) the number of members is reduced below two
(d) the company is unable to pay its debt;
(e) the court is of the opinion that it is just and equitable that the company be wound up.
Pursuant to the filing of a petition, the court will appoint a liquidator to gather in and dispose of the assets of the company and distribute the proceeds amongst the company’s creditors according their respective order of priority.
As a machinery for debt recovery, insolvency proceedings may be effective where the debtor company is engaged in external debt obligations such as securitisations, bonds, and project financing which normally become due and payable upon the commencement of insolvency proceedings against the debtor company. In such a situation it would make greater commercial sense to settle the extant liability than undergo the costly and reputationally detrimental process of establishing solvency.
Dr. Nwobike (2013) observed that, threatening a winding up petition and indeed the actual
filing of a petition as a means of recovering debt from a corporate debtor can be a powerful tool, albeit with its attendant risks. Experience has shown that, the mere threat of a winding up petition is sometimes enough to elicit a response from a corporate debtor as the publicity involved in a winding up proceedings can be devastating to the business and corporate image of the company concerned.
However, the fact that a particular creditor issued the petition on the basis of which the order is made does not mean that he will have priority over whatever funds that may be available for distribution. It is possible that he might not even get enough to cover the cost of the proceedings.  Consequently, before embarking on filing a winding up petition, it is pertinent that the creditor weigh the surrounding circumstances appropriately and if possible explore options for alternative dispute resolution.